DONATE
Home » Look At Mt. Diablo This Evening – The “Eye Of Diablo” Will Be Shining Bright In Honor Of Pearl Harbor Remembrance Day
Local News

Look At Mt. Diablo This Evening – The “Eye Of Diablo” Will Be Shining Bright In Honor Of Pearl Harbor Remembrance Day 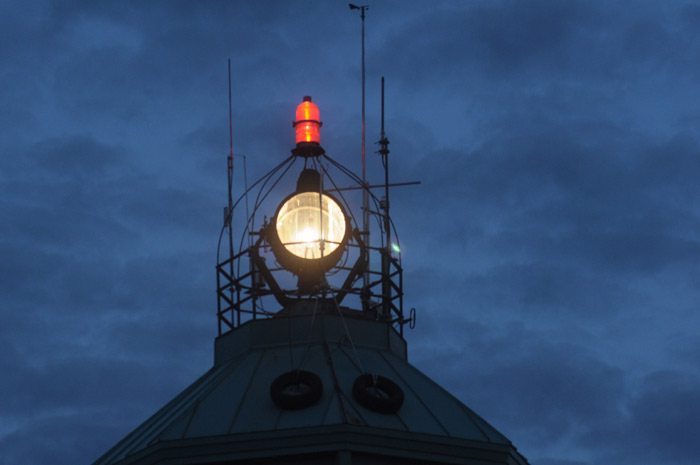 Mt. Diablo’s Beacon will be relit by a survivor of Pearl Harbor.

“The Beacon lighting is a tribute to those individuals that lost their lives at Pearl Harbor,” remarked Earl “Chuck” Kohler, the last known remaining serviceman survivor in Contra Costa County.

The Beacon on Mt. Diablo was originally installed and illuminated in 1928 to aid in transcontinental aviation. It is one of the four guiding beacons installed along the west coast by Standard Oil of California and is the only one known to still be operational.

After the attack on Pearl Harbor, the Beacon’s light was extinguished during the west coast blackout, for fear it could enable an attack on California. It stayed dark until Pearl Harbor Day in 1964, when Fleet Admiral Chester Nimitz, Commander in Chief of Pacific Forces during World War II, relit the Beacon in a commemorative ceremony and suggested it be illuminated every December 7th to honor those who served and sacrificed.

The Beacon is lit at sunset and shines all night on this evening each year. Beginning this year, it was also lit on Memorial Day and Veterans Day.

Thank you for the fascinating history of the beacon and its lighting. A friend’s mother once told me that she and others were part of a group that regularly stood watch on Mt. Diablo during the war looking for enemy ships and planes off the coast. Mt. Diablo provided the ideal lookout point with its expansive view of the San Francisco Bay and the nearby coast. Enemy planes and submarines had been spotted in the area. It was a detail about the civilian war effort I had not heard elsewhere.

Did you know that there is a steel net under the Golden Gate Bridge? It was put there to keep submarines from entering the bay. A portion of the hill across the street from the Cliff House is man made with hidden gun turrets. They had cannons pointed out towards the ocean. When I was a kid, we would play around and inside the turrets. The city has since welded the doors shut.

Good stuff, Dawg. Thanks for that.

You’re right, DAWG.
The Army had nets laid in the bay to protect from enemy subs during the war. They had ships called “net tenders” to control and maintain the nets. Growing up in SF in the 60’s, I joined the Sea Scouts and our ship was a retired net tender based at Aquatic Park. The ship was 65ft long and weighed in at 80 tons and was equipped with a telegraph system between the bridge and engine room. I understand that the ship was used to ferry convicts from Alcatraz during it’s closure before the scouts acquired it. It was such a blast to go on a week summer cruise in the delta for a bunch of city kids.

Thanks for these nuggets of information Dawg!

@Dawg I did not know about the steel netting under the Golden Gate Bridge. I would imagine it came quickly after one of our departing ships was struck by submarine fire just outside the Golden Gate. I visited the bunkers and the turrets a couple of times in the 170s. My father was stationed at Ft. McDowell during the war and we lived at East Garrison, taking the Ferry into San Francisco and the Presidio when necessary. There was a lot of marching and bivouacking on the island at the time.

Make that, “I visited the bunkers and the turrets a couple of times in the 1970s.”

Didn’t they have a laser beam shine after 9/11? For some reason I recall a laser beacon being used at some point.

Thank you -love it!

Beautiful to see that light.

I’m seriously impressed with how important that light looks. For some reason, I never seemed to get to see it on the seventh before, and, of course, not as brilliant and prominent as it looked tonight. It looks wonderful and the restoration work has certainly made it a feature not to be missed. I’ll look for it every year now. Thanks for the reminder, and all the interesting history about this very unique aspect of our landscape … found only in Contra Costa County. If the fog isn’t obscuring it, I’ll bet the view from San Francisco with the light flashing is equally impressive. A fitting memorial and tribute to those lives lost in the attack on Pearl Harbor those many years ago.

Such an honor twice when Steve and I, he now deceased, went to the memorial at Pearl when I worked with the City and I will never ever forget the moment or second I saw the oil seeping up from the Arizona. I was 27 and 36. Angers me so, what happened to our men. My husband kept me calm even that first time on it, looking down. I’ll never forget the oil seepish. He pulled me away, bless him. A good man. Bless this day for those souls lost.

viewed it from benicia , great view, and again when got home…