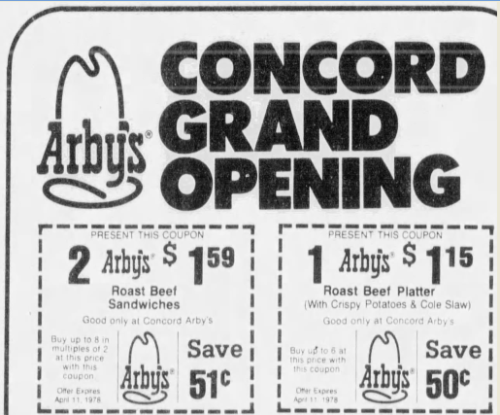 Who remembers Arby’s on Clayton Rd. in Concord?

Arby’s was located at 4340 Clayton Rd. in Concord, just east of Treat Blvd.

During their grand opening in the late-70s, a young Concord resident named Donald Davis won a free roast beef sandwich from Arby’s every day for the rest of his life.

Anyone know Donald Davis today? Has he gone to Arby’s every single day since he won the prize in 1978? 🙂

The building is no longer an Arby’s, it has housed New Lim’s Garden for the past several decades (see below).

ABOUT THE CLAYCORD ONLINE MUSEUM: The Claycord Online Museum is made up of historical photos, documents & anything else that has to do with the history of our area.

If you have any old photos or items that you’d like to place in the Claycord Online Museum, just scan or take a photo of them, and send them to the following address: news@claycord.com. It doesn’t matter what it is, even if it’s just an old photo of your house, a scan of an old advertisement or an artifact that you’d like us to see, send it in and we’ll put it online!

Click on the tag below titled “Claycord Online Museum” to view other items.

Mr Davis has to drive quite a long drive if he still lives in Concord and goes to Arbys every day!!
So annoying that there is no Arby’s close to Concord. 🙁

Better Arby’s than New Lin Garden. Hunan Garden is my go to.

There was an Arby’s a Park N’ Shop as well.

I really wish there was an Arby’s near here. Their sandwiches are delicious!

If he ate at Arby’s every day, Mr. Davis probably didn’t make it through the 80’s, either.

I went to an Arby’s in the 70’s and tried their roast beef sandwich. It tasted strange so I looked inside. The “meat” looked mosaic; flaked and glued together. I never went back. Roy Rogers used to have a roast beef chain. The meat was real, sliced very thin. I’d love to see that come back.