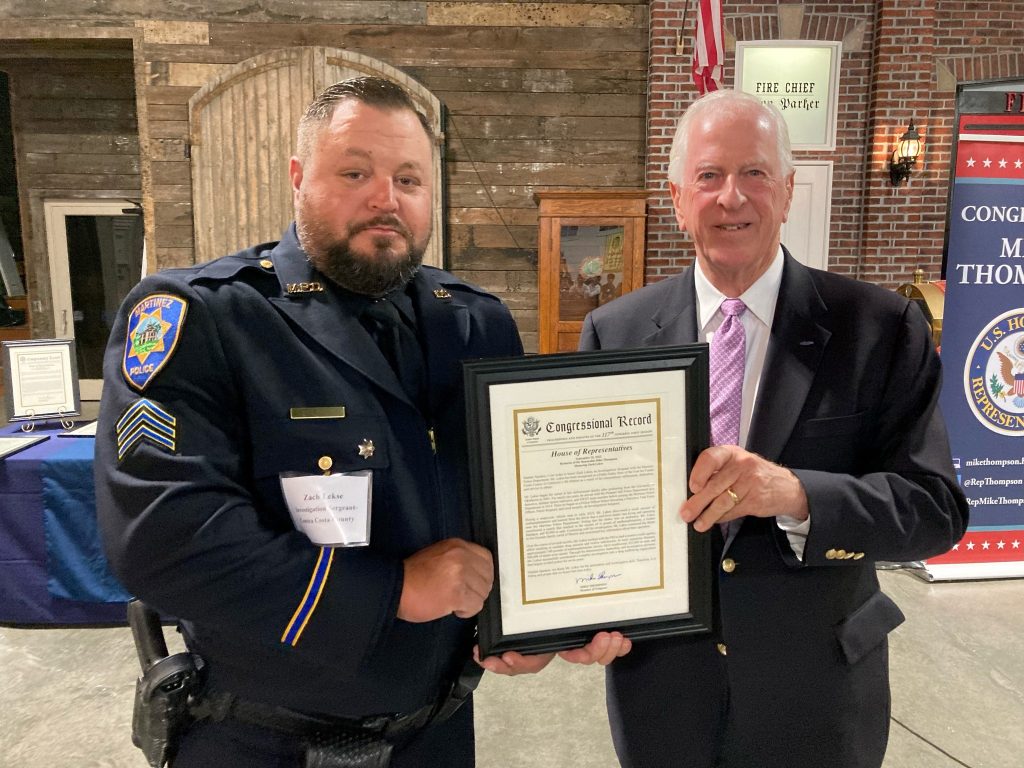 Each year, Thompson honors first responders in his district who have gone above and beyond the call of duty.

According to a statement from Thompson’s office, during a suspicious vehicle stop in early 2019, Lekse discovered a small amount of methamphetamine. The driver told him of a mid-level dealer living and operating near the Martinez Police Department.

Noting that the dealer was on probation, Lekse coordinated a search resulting in the seizure of a quarter-pound of methamphetamine, a loaded handgun, and $5,000 in cash.

During his ensuing investigation, Lekse found a connection between the suspect and the Guzman family cartel of Mexico. Over several months, Lekse worked with the FBI to lead a massive multi-agency effort that led to the seizure of numerous firearms, approximately 100 pounds of methamphetamine, $23,000 in cash and $80,000 of assets.

Last summer, Angell was on his way to a mutual aid cover assignment when he saw someone standing near the edge of the Carquinez Bridge. He realized the person was possibly contemplating suicide and contacted dispatch for a California Highway Patrol unit.

“After making the call, he realized that there may not be enough time to wait and approached the individual on his own,” the statement said. “Captain Angell spoke to the individual, comforted them, and talked them away from the edge. When authorities arrived, he returned to his original call.”

A salute to the PD and FD heroes, and a thank you to Congressman Thompson for recognizing, and honoring them.

May God Always Bless you Sir!!!!

.
Nah… District 5 is not gerrymandered.
.

I wouldn’t want my name publicly associated with anything to do with busting cartel meth dealers, but that’s just me.

You got that right. This is just the dems trying to counter the “defund the police” movement , which is built into their DNA.