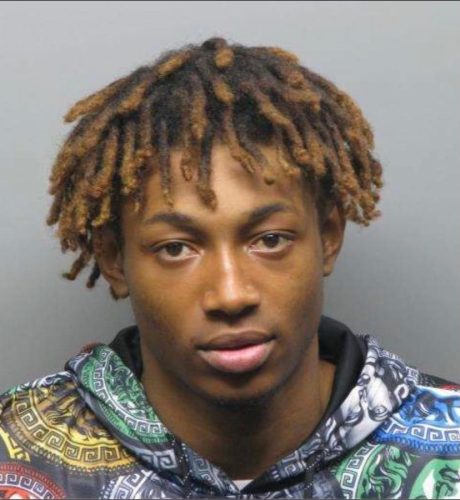 The following is from the District Attorney’s Office:

The attack happened on November 12 at The Habit Burger Grill on Mahogany Way in Antioch. The victim, 19-year-old Bianca Palomera, was trying to protect a relative of another co-worker from being bullied by Isaac White-Carter.

While Palomera was attempting to defuse the situation, White-Carter punched Palomera several times in the face. The force of the blows caused an irreparable injury to her eye. She was taken to a local hospital where doctors attempted to save her eye, but the damage was too severe.

After an investigation by Antioch Police, members of the United States Marshals Service located and arrested White-Carter in Hayward on December 5 and turned him over to Antioch authorities — who booked him into the Martinez Detention Facility. His bail amount is $215,000.

Contra Costa Deputy District Attorney Jason Peck said the charge of mayhem [PC203] White-Carter faces could be misunderstood by the public. “For many people, mayhem generally means chaos. However, legally, it means a person who maliciously deprives, disables, disfigures, or renders useless a part of another person’s body.”

In addition to the charge of mayhem, White-Carter faces charges of assault likely to produce great bodily injury with a special allegation [PC245(a)(4) and PC12022.7(a)] as well as criminal threats [PC422(a)].

If convicted by a jury, White-Carter could face a maximum sentence of almost 11 years in state prison. His arraignment is set for December 8 at 1:30 pm in Martinez.

The Water Cooler – Time Magazine “Person Of The Year” – Who Would You Choose?

Even 11 years is not enough for this POS.

And in reality, I’d be surprised if he actually does 3.

This article reminds me that we as humans are capable of such amazing good and bad. A purely despicable attack on a child with special needs and an extremely brave young woman coming to his rescue and losing an eye because of it. The duality of humanity, I suppose. It’s because of stories like these that I haven’t given up on us yet.

Train station for him

Only 11 years for punching someone’s eye out? She will need to live without an eye for another 60+ years. Hmmmm… is this justice? I think not.

Can the county deputy DA also explain why this is only assault and not battery? It wasn’t just a threat or an attempt, actual harm was caused. The charge doesn’t make sense.

He deserves the death penalty, trash like this has no place in society.

Hope the get him in prison.

Great job by the police department, I think 11 years is a deal for a criminal who’s thinks nothing about human beings life .

Almost all the cultural rot in our society traces its origin to academia. You want to clean up our society? You’ve got to start there.
.
This pos should have his eye removed by some frisky cellmate

I doubt he will be a model citizen when released at age 25 or 26.

That is why we need a swift and expedient death penalty. We don’t need to keep supporting people like this.

He was arrested in Sam Francisco in March 2022 for “battery on spouse / cohabitant”.

He was arrested in Concord August 2021 for……….”battery on person / threats of violence”.

If you’re trying to do research, Isaac Jaquan White-Carter is the name.

I know that picking on a disabled kid & punching out a woman is the act of a despicable coward, but did the police really have to dump a cowflop on his head before taking his picture?

For a moment, I mistook him for Biden’s press secretary.

Makes you wonder where this learned behavior comes from…
Priors?
Agree, when he gets out he will probably be an angry ex-con re-offender. Hope he proves us wrong.

It seems that a guy with a hair-trigger like he’s demonstrated is likely suffering from testosterone poisoning. Castration would likely fix him right up.

“…White-Carter punched Palomera several times in the face…”. These actions prove his intent and he should be getting 25 years MINIMUM!!

If convicted by a jury, White-Carter could face a maximum sentence of almost 11 years in state prison. Meanwhile, HIS convictions have altered her life for good!

“…His bail amount is $215,000…”. He obviously won’t be making bail, but all the politicians who are pro defending criminals should be making sure SHE receives that amount plus covering for her medical bills, therapy, and for the jobs she will no longer qualify for!!

CRIMINAL JUSTICE is code word for protecting the rights of criminals.

He should get life without parole.

I’m sure newscums reparations committee will give him the money for bail.

Let me get this straight….He was granted a bail amount? How insane is that. This animal should be locked in solitary forever.

Abuses a disabled person.
Reflexively resorts to violence when confronted.
Assaults a woman to the point of disfigurement.